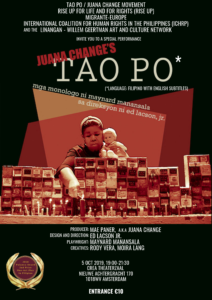 Stichting Linangan and the Willem Geertman Art and Culture Network

Rise Up for Life and for Rights (RISE UP)

International Coalition for Human Rights in the Philippines (ICHRP)

invite you to watch the stage play

In this play, Mae delivers four powerful monologues that address the issue of extrajudicial killings and the government’s campaign against illegal drugs. She plays four characters: a zumba dance instructor whose son and husband were victims of extrajudicial killings; a photojournalist whose credibility is questioned by the media publication that he works for; a policeman, who violates the law to collect a bounty; and a young child who pays her respect to victims who are carelessly buried in the notorious Tokhang Wall in a cemetery.

“Tao Po” are words uttered when one knocks on the door. On one hand, one cannot help but be reminded of “Tokhang,” which is the name of the government campaign against illegal drugs. It comes from the Visayan words Tuk-tok (knock) and Hangyo (Plead/persuade). On the other hand, “Tao po” could also mean “I am a human being.”

“Tao Po” is a montage of narratives about extrajudicial killings in the name of the war on drugs. It raises the question, “Is extrajudicial killing the best answer to the drug menace?” After the show, there will be a dialogue / interaction between the audience, the artists, relatives of victims, human rights advocates and the organizers of the theater tour.

This is made possible by the cooperation between Tao Po Productions/Juana Change Movement, Rise Up for Life and for Rights (RISE UP), MIGRANTE-Europe, Internation Coaliton for Human Rights in the Philippines (ICHRP), and the Linangan-Willem Geertman Art and Culture Network.